Cycling and Heuvelland? A marriage made in heaven! Our hills offer challenges great and small to cyclists of all kinds: city bikes, electric bikes, race bikes, touring bikes, mountain bikes. And all in magnificent natural settings!

Heuvelland's 'mountains' tower above the flat country of the Westhoek. The most famous of these 'mountains' is
the Kemmelberg. Every amateur cyclist wants to test himself against this monument of the classic Ghent-Wevelgem race, with its gradients of up to 22%. But there are plenty of other hills that offer challenging climbs to even the best biking fanatics. You don't possess the climbing capacities of a mountain goat? Not to worry: since the advent of the electric bike, Heuvelland has also become a mecca for recreational cyclists of all ages. Nowadays, anyone can conquer even the steepest slopes!

There are plenty of places in Heuvelland where you can hire these bikes. 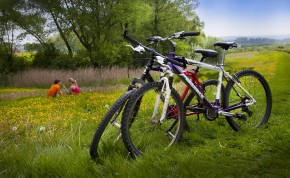 This cycling route - the name means something like 'huge appetite' - not only passes through beautiful countryside, packed with breathtaking views, but will also lead you to all the tastiest addresses in Heuvelland. Not to mass producers and distributors, but to local craftsmen and entrepreneurs who work hard every day to create the most delicious regional delicacies with their own hands. These passionate souls will be delighted to welcome you and explain all about the things they make. It is a good idea to follow this route during the weekend, from Friday to Sunday, because that is when these local producers are most likely to be open to visitors.
The circuit starts at the Visitors' Centre in Kemmel and is roughly 44 kilometres long, although it can be split into two trajectories of 21 and 23 kilometres.

Starting in Poperinge, this route follows the undulating southern border of Flanders as far as the Voer region in Limburg, passing Brussels on the way. The trajectory will also take you through Heuvelland, the rolling landscape to the south of Kortrijk, the Flemish Ardennes, Pajottenland, Hageland and Haspengouw.
The part of the route in West Flanders measures 122 kilometres and includes several areas of great natural beauty. In addition to Heuvelland, with its Kemmelberg and Rodeberg hills, you will also climb the watershed between the river Lys and the river Scheldt, before ending with the majestic Tiegemberg, with it magnificent panoramic views.

Who measures up with their sporty teammates on Strava? Heuvelland uses its toughest slopes for this. Start and finish of each hill were marked on the road surface. The following hills challenge you to a Flandrien Challenge: the two flanks of the Kemmelberg, the Gildestraat and the Schomminkel, the Scherpenberg, Monteberg, Lettenberg, Zandberg and Baneberg: all plucked from the cycling classic Ghent-Wevelgem.

Since spring 2020, three riders from the peloton De Escape by artist Eric Nagels will attack at the roundabout Polka in Kemmel. A fourth rider is called Werner Kerner. Servant teammates accompany Werner every year with the necessary decibels from his winter to his summer residence and vice versa.

Discover the hills of Heuvelland as you follow the course of the classic Ghent-Wevelgem cycle race. You can arrive on your own or in a group at the start in the 'Gaper' Cultural Centre, the welcome point for recreational cyclists in Kemmel. Afterwards, you can leave your bike safely in a bike box, while you enjoy a refreshing shower.
With 'Homeland of Cycling', Flanders Tourism seeks to encourage active participation in the great cycling experience.

Discover here all cycle trails in Heuvelland and the address for bike rental!